Moldova is a small and relatively poor country on the edge of Europe. It was created in 1991 after the break-up of the Soviet Union and is precariously balanced, politically, socially, and linguistically, between Russia and the European Union. Two thirds of Moldovans are ethnically Romanian, while the disputed industrial area of Trans-Dniester in the East is predominantly Russian speaking and has unilaterally declared its independence from Moldova.

The delicate political situation in the country has led the government to follow a strategy of regulatory alignment with the EU, with the long-term goal of joining the EU; however, at various times and in various ways, it has also sought to maintain relations with Russia. In terms of telecommunications, this has meant following the EU’s regulatory acquis, but the extent of its compliance has decreased over time, as the prospect of eventually joining the EU has receded and as national politics have become more pro-Russian since President Dodon was elected in 2016.

The first round of telecommunications market analysis in Moldova began in 2009 and followed the EU guidelines strictly; subsequent updates have been streamlined but they have not followed later developments in the EU framework. This has resulted in a robust but flexible methodology that demonstrates good practices that might usefully inform regulators in other jurisdictions.

The market analysis procedures were established at a time when EU alignment was the clear policy objective. Funded by the European Bank of Reconstruction and Development (EBRD), a major regulatory reform project was undertaken, at the centre of which was a programme of regulatory market analysis. The national regulatory authority, National Regulatory Agency for Electronic Communications and Information Technology (ANRCETI), issued regulations in December 2008 (ANRCETI 2008) on the identification and analysis of relevant markets in electronic communications, which closely and carefully followed the EU framework.

The regulations required that ANRCETI:

The regulations also required that ANRCETI review its market analysis every two years.

The first round of market analysis

In April 2009, ANRCETI published a proposed list of relevant markets (ANRCETI 2009). Each of the markets was analysed in detail over the following two years, following the methodology prescribed in the regulations, so that the scope of the market was determined, SMP operators identified, and appropriate obligations imposed upon them. The following table summarizes the decisions reached.

The approach adopted by ANRCETI to the determination of SMP is of particular interest. It was a two-step, semi-quantitative methodology. The first step involved the computation of market share to see whether the 35 per cent SMP threshold was passed. In this analysis, preference was given to revenue-based market share, but other measures such as subscriber numbers were also assessed. If market share was high enough to create a presumption of SMP, the second step involved testing the hypothesis by quantifying the relevance and the significance of each of the secondary criteria mentioned in the regulations. An overall score was then produced which would either confirm or rebut the presumption of SMP. The process can be summarized as shown in the diagram below: 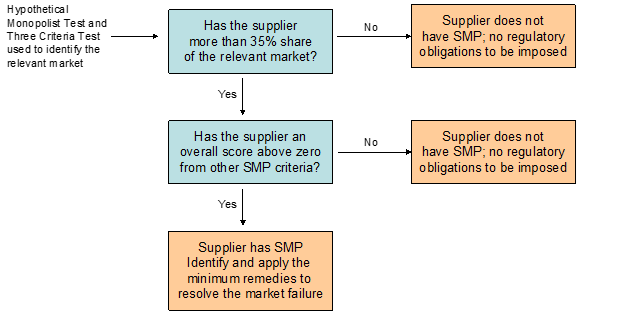 In ANRCETI’s 2011 report of activity, it noted that 51 economic regulation decisions were issued during the two-year market analysis process, and these represented 80 per cent of the full workload of the authority. Each of these decisions was the end product of substantial analytical work, supported by comprehensive public consultation. In other words, the regulator had invested substantially in the first round of market analysis; it hoped that subsequent updates would prove more straightforward and expeditious.

By the end of 2018 ANRCETI had successfully completed four cycles of its market analysis procedures (ANRCETI 2018: 4). Each cycle was conducted on the basis of exception reporting: the analysis from the preceding cycle was retained unless a material change in the market justified re-examination. In some cases, updates required a change of market definition: e.g. broadband was added to Market 5[1] during the second cycle; virtual unbundled local loops and fibre access was added to Market 4 in the third cycle. In other cases, remedies were changed: e.g. cost orientation was added as a requirement in Market 1 during the second cycle, and the cost model that informed interconnection charges in markets 3 and 7 was updated during the third cycle. And, in the fourth cycle, Market 2 and Market 8 were found to have become effectively competitive and were thus removed from the market analysis.

This case study illustrates the extensive work that is required if a regulatory authority is to undertake market analysis effectively. However, it also demonstrates that, if the right foundations are laid at the start of the process, the regulatory framework for market analysis can evolve gradually over time so as to retain its effectiveness as technology and markets develop. This can also be done in a timely manner and without requiring excessive regulatory resource, particularly if the key decisions are taken in an objective and quantifiable manner.

It should be noted that market analysis in Moldova has focused on traditional telecommunications markets. It is likely that these markets will increasingly become subject to exception reporting and revision, or to addition (such as digital platform markets). This is not a criticism of the approach itself, but, rather, describes the increasingly dynamic times in which we now live.